Betting on Heroes of the Storm 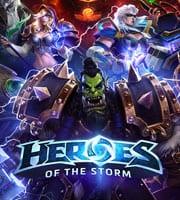 Heroes of the Storm is Activision Blizzards new MOBA game. The game is clearly inspired by Dota but has a new take on some concepts. A HotS match is in general quicker than an original Dota match. In addition, to this there are different maps with different side-objectives to help your team to destroy the enemy teams ancients quciker. In addition, to this there is no such thing as an individual hero level, instead the team has a shared teamlevel. eSport matches in HotS are played 5 versus 5.

Gameplay of Heroes of the Storm

Heroes of the Storm is a MOBA game (Multiplayer Online Battle Arena). Two teams, 5 players each, fight against each other on a random battleground. The objective is to destroy the enemy’s base. It’s not as easy as it seems. The game combines tactical and arcade elements and there are many ways to complete the main task. During the game, the player needs to take care of many factors, e.g. controlling the main tactical points, conquering camps with mercenaries, paying attention to enemy’s moves etc. Heroes of the Storm is based on micropayments. It means that downloading and using the game is free, but you have to pay for some convenient options (which don’t affect the gameplay directly). All heroes available in the game can be purchased for virtual gold that you get for playing, leveling and daily quests. For real money, however, you can buy skins and mounts. HotS is different from typical MOBA games because the game is not divided into early, mid and late game. Unlike in DotA or LoL there is no learning phase. The players don’t level up their characters because levels are global – for the entire team. During the game, you can reach up to 25th level. You can gain experience for almost anything – killing mercenaries, destroying buildings, or defeating enemies. Because of that, every player in the team is on the same level and nobody gets left behind. Moreover, in HotS you don’t get gold for kills, so there is no farming. Therefore, you can focus on cooperation and conquering the objects.

How to Bet on Heroes of the Storm?

HoTS’s competitive scene is still growing in popularity, so the demand is not there yet for online sportsbooks to take bets on tournaments outside of the official league run by Blizzard, the Heroes of the Storm Global Championship Circuit (HGC).

Thankfully, many of our favorites sites actively take moneyline/match winner wagers on HGC majors and premiers all-year round.

Types of Bets for Heroes of the Storm

You can choose to bet on:

Places To Bet On Heroes of the Storm