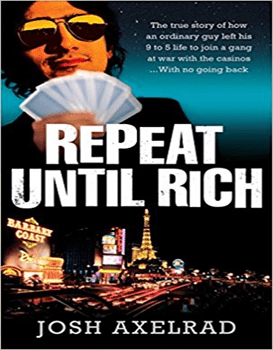 Josh Axelrad’s “Repeat Until Rich,” his new memoir about winning some $700,000 playing professional blackjack, emits a lively hum from the second you crack it open. Like Dave Eggers in “A Heartbreaking Work of Staggering Genius,” Mr. Axelrad tattoos every available surface of his book’s front matter.

First there’s his acknowledgments page, which is among the freshest I’ve seen since the one in Thom Jones’s 1995 story collection, “Cold Snap.” In that book Mr. Jones thanked two major drug companies — Wyeth/Ayerst Laboratories and Stuart Pharmaceuticals — for “further expanding that narrow channel of joy by manufacturing Effexor and Elavil; drugs so good they feel illegal.” In “Repeat Until Rich,” Mr. Axelrad thanks a different set of enablers, including the Internal Revenue Service, as well as “Chase MasterCard, American Express, Discover Financial Services and everyone else who believed.”

Then there’s Mr. Axelrad’s “Note on Veracity,” in which he admits necessarily changing some names and other details in “Repeat Until Rich.” He also admits that he’s broke, having squandered his blackjack winnings playing, like the hipster doofus he sometimes seems to be, online poker.

“While the game on average is biased toward the house, as you’d expect, there are moments it’s inverted: the house edge disappears, and the player is briefly the favorite.”