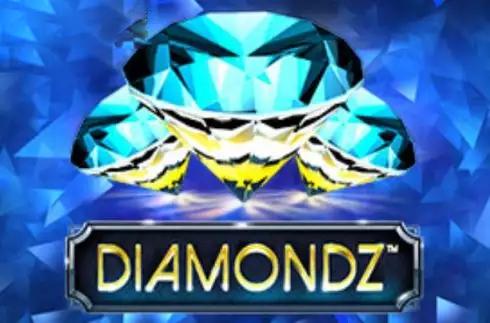 Show off your greatest gaming skills with Diamondz Slot by Synot now!

Intro to the Diamondz Slot

This Synot Games masterpiece is poised to rule the slots industry in 2021, and though it was only just released, several of the top online casinos have already added it to their repertoire. Diamondz provides players with a brand-new gaming experience that includes a variety of features and prizes that are hidden deep within an ever-expanding galaxy.

Synot Games has learnt how to create top-notch slot machines over the years, and they've demonstrated their expertise with this one-of-a-kind DiamondzSlot, which offers players cutting-edge features and gorgeous mechanics that can only be found on this game. Furthermore, the slot greets players with a pleasant and wonderful cluster system, which is based on a hexagonal game that arranges symbols in three tiers.

Players will receive a total of 57 spins in this game, with 3 to 5 symbols on each reel. When players collect 6 or more symbols, they create a cluster, and when you reach the highest rewards, you'll notice that you may earn up to 1347 times your original bet, thanks to a variety of wilds. This game also has a number of intriguing mechanisms that allow players to accrue multipliers that may reach as high as 20x, as well as a number of Free Spins that offer you an extra chance to win big.

This one-of-a-kind new slot has a low RTP % when compared to other popular slot games, but that may be attributed to the fact that the game has only been played for a short period. 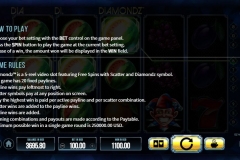 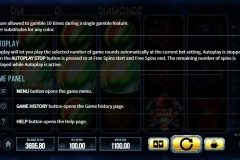 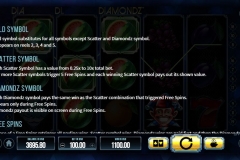 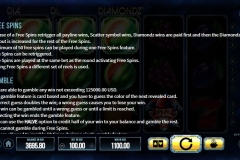 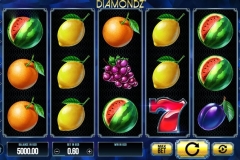 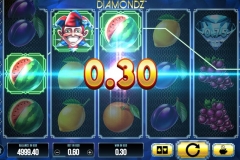 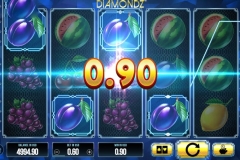 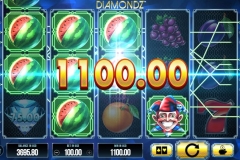 What are Multiline Slots?

In the gaming world, multiline slots are slots that give players with several paylines in order to increase their chances of winning. More paylines increase the number of chances to form winning combinations; nevertheless, this slot does not have any paylines.

When it comes to grid spaces, the brilliant developer Synot Games has a thing going for them, and it has surely paid off. One of the most appealing aspects of this format is the freedom it provides participants, since they can pick whatever shape they choose. Stakes can be placed anywhere from $0.20 to $100. Despite varied RTP percentages seen on the internet for this slot game, many players have described it as very unpredictable, therefore players should exercise caution when playing.

Stakes can be placed anywhere from $0.20 to $100. Despite varied RTP percentages seen on the internet for this slot game, many players have described it as very unpredictable, therefore players should exercise caution when playing. Furthermore, the goal of the game is for players to create winning clusters of similar symbols with at least five matching symbols. You increase your chances of winning by creating clusters. You should also be aware that several clusters of the same symbols will result in different cluster victories.

Unlike other games set in forests and tropical locales across the world, this one is placed far beyond the grid of Planet Earth, in the farthest reaches of the cosmos. Many players will find Diamondz's theme to be extremely unusual, as it is set in the midst of space, but don't be fooled by the dark look; there are lots of warm rewards waiting for you in space.

Because there are many gems floating about in outer space, the symbols of this game are pretty similar to any diamond-based game you may have encountered. The low-paying symbols are four single-colored bits, whereas the high-paying symbols are four huge quartz-like chunks of rock. The values of the symbols depend on whether they are low-paying or high-paying ones, but for now, we have no cler information on which symbols are which.

How To Play the Diamondz Slot

This one-of-a-kind new slot is played on a five-reel sided design. As previously said, this game's grid is genuinely unique in that it is made up of three components: a center vortex that works as a wild, each ring includes a Zone that is fixed at the top, and each ring contains a Zone that is fixed at the bottom. Once a winning combination is formed, the player places 5 or more adjacent symbols that link to form a cluster. It should be emphasized, however, that only the highest cluster victory gets paid out. Following this action, the winning symbols are removed from the reels, and the new symbols fall back into the empty ones.

You may start your Diamondz adventure with stakes ranging from $0.20 to $100, and you can modify the values using the arrows at the bottom of the screen. Additionally, if you just want to sit back and watch the show, you may use the autoplay feature by pressing the golden button to spin the next set of numbers. By clicking on the wild symbol, players may also engage the turbo mode, which speeds up the game. Overall, this slot game is not difficult to play, as players may take use of a variety of features, wilds, and clusters to increase their chances of winning.

There are lots of possibilities for players to generate winning combos because to the game's unusual design, which has 5 reels and a grid made up of 3 rings. Players must, however, pay special attention to the development of winning clusters of adjacent symbols, since here is where the huge reward is buried.

Our 100 Spins Challenge on Diamondz Slot

Players may trigger the Free Spins feature by landing a Bonus symbol inside the Zone. Each Bonus symbol awards 5 free spins, so you might finish up with 5, 10, or 15 free spins. Furthermore, the WIld multiplier is active during the free spins; it does not reset after each free spin, but instead continues to improve. Every time a player completes a task, they can be awarded with a re-trigger.

This slot, like the rest of Synot Games' online slots, is completely compatible with all mobile devices and smartphones now available. Diamondz features are currently available on desktop PCs, laptops, tablets, and a variety of other devices.

We are currently unaware of a free-to-play mode available to all players in this game. One drawback of the game that we must highlight is that novices and new players will not be able to gain a useful understanding of the game's features and gameplay without risking their own money.

How To Win at Diamondz Slot

As previously stated, this game operates on a hexagonal grid defined as a 5 by 3 reel-set, and it employs a number of novel features. One of the most important aspects of this game for players to win is to construct clusters of nearby connected symbols. Winning icons are removed from the grid to allow new symbols to fall into the gaps, allowing new combinations to be created.

Furthermore, players benefit from two sorts of Wilds, both of which may stand in for any paying symbol. The Core Wild, on the one hand, always stays in the middle of the grid, whilst the Sticky WIld travels with any cascade. When you trigger a winning combination, the Spin function is activated, causing the innermost and outermost rings to rotate clockwise.

We only know about a few of the features and extra choices so far, but we'll go through the most important ones that will be at the heart of Disco Diamonds. This video slot, in order to cater to a wider audience, has a Free Spins bonus, which has yet to be stated as to how it may be triggered, but we believe it will include the Scatter Symbol.

The Scatter symbol is also an unusual and intriguing element of this game, and players can get Free Spins from this mystical wheel. Once a player has engaged the function, there is a multiplier bonus that grows with each consecutive re-spin. If you opt to wager large, this one may surely bring you a lot of significant profits.

Overall, we feel that this game has a lot of things to offer for its simple game play style, and don't forget that this is only a sneak peek, as the Play'n Go team has much more up their sleeves.

From the data we have carefully selected and researched on the web, we have noticed that the RTP percentages regarding this slot game differ, however one notion players agree on and that is that Diamondz has a volatility rate ranging between medium and high volatility. To be brief, this game harnesses some massive winning opportunities, and it's to be expected that it has such a high volatility. One bad aspect of this notion is that it is quite uncomfortable for new coming players.

Book of Secrets 6 is the new slot machine of the online game provider Synot. The brilliant game is perfect ...

In all, we can conclude that this slot game is out of the norm and is ideal for gamers who want to try something different. If you want to check out this one-of-a-kind slot game, it has a distinctive hexagonal design, 5 reels, and different enhancing elements to keep you occupied. Despite the fact that the subject is not as exciting as one could hope, there is still a lot to draw players, especially when you consider the warmth provided by the brilliant gemstone symbols and various crystals buried in the mists of distant space.

Overall, this game is expected to be published before the end of the year, giving us something wonderful to look forward to in 2021. The slot is pretty simple to play and has a sufficient number of features that we are aware of, but there may be features that we are unaware of. Because the game is compatible with all platforms, gamers using iOS and Android smartphones will be able to enjoy it as well. On top of everything else, this game allows you to win as much as 1347 times your initial stake.

FAQ about the Diamondz Slot

Why is Diamondz So Popular?

The fact that it has an uncanny mechanism paired with beautiful characteristics is what has drew so much attention to this new release. To cut a long tale short, it's strange and has its advantages, which is why gamers have learned to like it.

In this slot game, players have the chance to earn up to 1347 times their initial wager.

Can You play Diamondz with Bonus Money?

There is no problem for players who want to utilize their free money on Diamondz Slot; nevertheless, there may be problems if there is an issue with the online casino's terms and conditions.

Why Is This Slot Called Diamondz?

Because the frid and paytable are situated in the center of the cosmos, the game's name is derived from its concept and arrangement. When you spin into the backdrop, it feels like you're spinning into a deep interspatial vortex, but you're actually spinning into serious fun and rewards.

Can You Play Diamondz on Mobile?

Diamondz Slot is entirely compatible with all mobile devices, particularly smartphones, as players may use any iOS or Android device to access all of the game's features. Their mobile version has been designed to provide gamers with the same experience as on their computer.

How Do You Get Free Spins on Diamondz Slot?

Players may trigger the Free Spins feature by landing a Bonus symbol inside the Zone. Each Bonus symbol awards 5 free spins, so you might finish up with 5, 10, or 15 free spins.

Play Now at Our Top Pick: