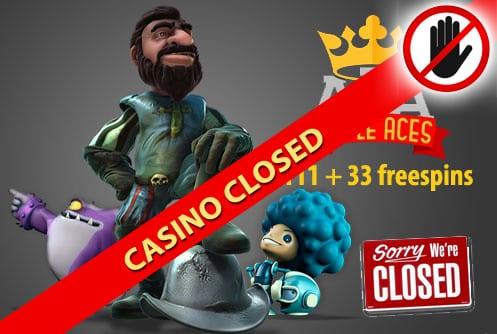 1%
Compare with Other Brands

Triple Aces Casino released a statement informing the public that they will no longer be able to accept new players from November 1, 2018. Triple Aces Casino will officially close its doors on November 15, 2018. Until then, players have time to withdraw outstanding balances to a bank account / e-wallet of their choice.

We have updated our review of Triple Aces Casino accordingly and not it has a NON RECOMMENDED status. Our viewers should avoid registering or playing at the casino from now.

Triple Aces is a new Online Casino, launched in August 2017. It is an online gambling site operated by GT Entertainment Ltd., a company registered in Malta. The site and its sister-site Casino Win are licensed by the Malta Gaming Authority via a Class 1 on 4 license for NetEnt and all NYX provided games. It’s unclear how some games from other providers are certified. What is certain is that there is a lot of variety in the game choice.

Triple Aces Casino is dual licensed in Malta and by the Kahnawake Gaming Commission, some of the terms and conditions are a little draconian at both sites.

To welcome new players at Triple Aces, the casino gives newly registered people a warming welcome bonus. The welcome offer consists of two parts, the first part being a deposit bonus. You will receive the bonus after you have made your very first deposit, which will be doubled! The bonus is 100% the amount of your deposit, up to €111.

The casino is browser-based so all games are available to play on any device with a modern browser that’s connected to the internet or cellular data network. The site is laid out simply and cleanly and features RNG card games like blackjack and video poker; table games such as roulette, dice, and keno. The live dealer stream features betting games like Dice Duel and lotto/bingo type games such as Luck 6 in addition to live dealer streams from Evolution Gaming with games like roulette.

While offering slots from at least l0 providers, there are only a few games listed under most developers. Looking under Microgaming you’ll find titles from Quickfire partners like Leander Games with Alaxe in Zombieland. The database is not precise, however, as you’ll also find Butterflies from NextGen (NYX) mixed into the Microgaming offering.

The Jackpot section is rich with games like iSoftbet’s Jackpot Rango, Stellar jackpots with Chilli Gold by Lightning Box, old standbys such as Fruit Fiesta, Major Millions Progressive, and Cash Splash, as well as several BetSoft and NextGen titles.

For those who are big fans of real live casino play AAA Casino has a brought selection of games where you can play against a realtime dealer. There are nearly 150 table games to choose from if you count the video poker variants they have in the category. If you like 3D animated dealer table games try Stud Poker 3D or Poker3 Heads Up Hold’em or visit the Evolution lobby for real live dealer games.

English is the only language available.

Within office hours you can contact the Customer Service of Triple Aces Casino. You can reach them by Live Chat or you can send them an email by using their Contact Form. They are glad to help you with whatever issues you run into, during office hours a.s.a.p, which means at least within 8 hours. Besides those ways to get in contact with the Triple Aces Team, you can also look at their FAQ-list, which provides you with answers on the most common questions. The Triple Aces team is one who cares about their players and wants to serve them well.

Current Methods for Deposits and Withdrawals