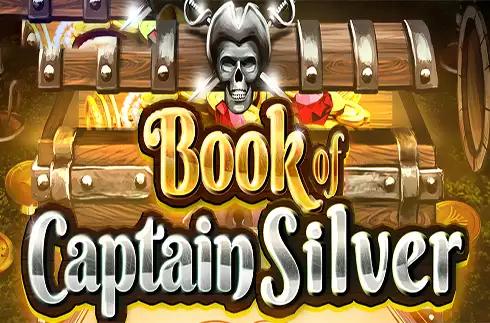 Provoke yourself and jump right into the unknown with the Book of Captain Silver Slot! 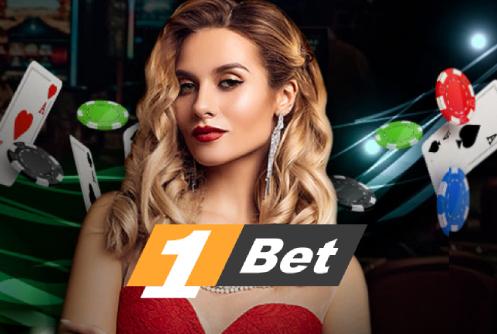 Intro to the Book of Captain Silver Slot

All41 Studios, a partner who consistently produces good slot machines that are exclusive to their platform, will deliver Book of Captain Silver to Microgaming casinos in the next months. They didn't come up with a new concept or mechanics for this one, as it's a Book-style launch, but there are a number of fascinating features. The Book of Captain Silver slot machine has 5×3 reels and 10 fixed pay lines. The slot outperforms most others that use Book-style principles, with a Mega Jackpot worth up to 10,000x the wager.

Book of Captain Silver is a five-reel, four-row video slot with ten paylines. Matching three or more symbols along adjacent lines on adjacent reels, starting with reel one, results in a win. From 0.10 to 25 credits per spin, spin your way to hidden treasures. This game has a high RTP of 96.40 percent and a high volatility. With beautifully detailed artwork in a realistic style, the Book of Captain Silver is extremely striking. Melodic folk music featuring flutes, fiddles, and pennywhistles, typical of pirate games, adds a melancholy sense to spins throughout the base game and speeds up the tempo in the bonus. As studios compete to stand out and attract gamers, online slots are more attractive than ever in 2021.

Like most Book slots, this one also has a higher than average Return to Player of 96.40 percent. 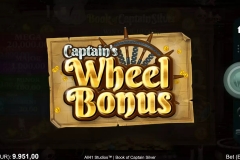 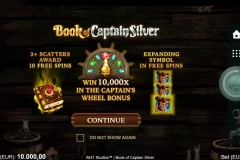 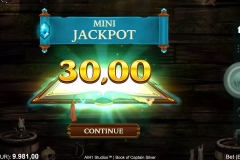 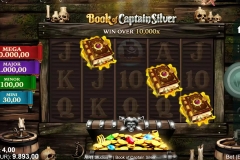 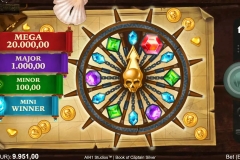 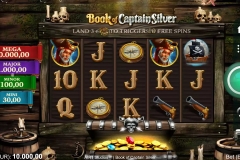 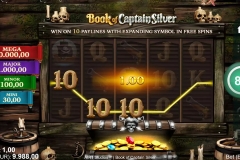 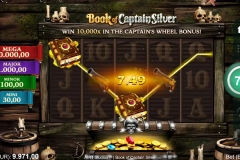 When the game first appears on the screen, players find themselves in the bowls of Captain Silver's ship. All41 went for grim realism, involving moldy wooden planks, skeletons, candles, and barrels carrying mystery cargo; let's assume gold coins. It's a change from the normal deck scenario of a ship powering across the waves under a brilliant Caribbean sky, sails full of trade winds. The other important alteration is seen on the left-hand side of the screen immediately away. Four jackpots are displayed here, each representing a multiple of the entire wager, while a chest sits beneath the reels, waiting to be filled when scatter symbols land.

A Book, in this scenario the one belonging to Captain Silver, is the standard feature icon in these games. It's utilized as a substitute if it can help, thus it has to be near to conventional symbols that match to build a victory from left to right. These Books will behave as scatters, paying up to 200x your stake and triggering 10 free spins if you get them in sufficient numbers, with 3 to 5 visible. A special symbol, like in every other Book release, can grow and make combinations even on non-consecutive reels. All you have to do is get them on 3 to 5 reels, and 10 combinations of 3 to 5 symbols will appear.

Scatter symbols, like most ‘Book' slots, also operate as wilds, and the game mainly relies on these mixing with symbols for bigger payouts. As a result, stronger slots of this type usually have greater than average pay for matching symbols, and Captain Silver pays 500x your stake for five of a kind. The real treasure is discovered during the free spins round, which kicks off the treasure hunt. The Book of Captain Silver Free Spins bonus is triggered when three or more Book symbols appear anywhere on the reels. A random pay symbol is chosen as the special expanding symbol for the round when you enter the bonus. Book symbols aren't available for expanding symbol choices, but they still appear on the reels. Expanding symbols that land on the reels will fill them on each spin. Before computing expanding symbol pays as scatter pays, standard pays are calculated and awarded.

Book wilds do not mix with special expanding symbols, and three or more Book symbols will retrigger the round, giving you another ten free spins. When a Book symbol lands on the reels, its magic is transferred to a treasure chest at the bottom of the game. The Captain's Wheel Bonus can be triggered at random during both the regular game and the free spins feature by landing a book symbol in this chest, which includes four jackpot rewards. The Captain's Wheel is divided into twelve parts, with six blue gems, three green gems, two purple gems, and one red gem in each. Following the spin, whichever color gem the cursor lands on will award one of four predetermined jackpot prizes: Blue Gem – 15 x Bet MINI Jackpot; Green Gem – 50 x Bet MINOR JACKPOT; Purple Gem – 500 x Bet MAJOR Jackpot; Red Gem – 10,000 x Bet MEGA Jackpot.

How To Play the Book of Captain Silver Slot

The number of active lines will always be 10 regardless of the wager placed in the range of $0.10 to $25. In this situation, there are two types of large awards that can be claimed. The normal one for a Book slot is present, so the top symbols will pay 500x the stake on each line, and you can get them all to pay you at once, resulting in a payout of 5,000x the stake for a single spin (during free spins). The Mega jackpot is the greatest of the four fixed jackpots contained in the Jackpot Wheel feature, paying 10,000x the bet.

Our 100 Spins Challenge on Book of Captain Silver Slot

Our crew at CasinoDaddy.com reviews all of the slot machines we recommend to our users to ensure you get the best gaming selection! We gambled on the Book of Captain Silver slot in an unique 100 Spins Challenge to show you how it works and what additional features and prizes you may expect. It's available to view here:

The Book of Captain Silver Slot is an HTML5-based game that can be played on computers, tablets, and smartphones. Mobile devices can view and interact with the high-definition graphics and animations without any problems.

If you want to familiarize yourself with the game before making a real money deposit, the Book of Captain Silver Slot free play option is ideal. Because the awards are exclusively made up of virtual money, the free play demo is identical to the premium version. These virtual funds might help you keep track of the payout schedule.

How To Win at Book of Captain Silver Slot

When at least two premiums or three low pay symbols land from left to right on the first reel, you'll win. Low-paying symbols include 10-A card royals, while high-paying symbols include compasses, pistols, ships, and Captain Silver. On a side note, when researching the game, we discovered that compasses were first invented in China about the 2nd century BC and were known as the South Pointing Fish. What's even more intriguing is that they weren't designed for navigation but rather for geomancy. In any case, payouts are at the high end of the ‘book of' spectrum, with five-of-a-kind premium winners earning 75 to 500 times the bet.

You'll be given 10 free spins, and the Book will open up, allowing you to choose a special expanding symbol at random. When enough of the chosen symbol land to form a winning combination, it expands to occupy the entire reel, and it does not need to land adjacent to do so. The winnings from expanding symbols are always given out after the standard rewards.

Book of Captain Silver was created by All41 to run on any device and allows players to place bets ranging from 20p to £/€25 each spin. The RTP is available in three different versions, the most generous of which is a healthy 96.40 percent, but search for a 94.24 percent version, or less, depending on the market. All are extremely volatile, with a win occurring around every three spins, or 30.71 percent of the time.

Book of Captain Silver Slot Takes You on a Thrilling Adventure

If you are looking for one of the most attractive new slots August 2021, you have come to the right ...

The pirate theme distinguishes this slot from a lot from the Egyptian tomb storylines, which is a welcome change from All41 Studios. On a single lucky spin, you can earn up to 5,000x your bet, which is the main draw of most ‘book slots.' It includes the Captain's Wheel Jackpot feature, but don't expect it to come up very often. It's preferable to think of it as an added bonus, potentially rewarding players for sticking with the game for a longer period of time. It does, however, provide you the chance to win twice as much as the ‘standard' maximum win in the ‘book of' genre, which may persuade some to try their luck here rather than in the myriad others available.

FAQ about the Book of Captain Silver Slot

Why is Book of Captain Silver So Popular?

Mainly because of the large audience that All41 Studios as a software developer has.

This online slot can bring a multiplier of the original bet.

Can You play Book of Captain Silver with Bonus Money?

Yes, you can! Players can use their bonus money from a casino bonus to play this particular slot game.

Why Is This Slot Called Book of Captain Silver?

The slot is called Book of Captain Silver because of the setting of the slot and its graphic design.

Can You Play Book of Captain Silver on Mobile?

Yes, the game is fully compatible with all types of mobile devices as it utilizes HTML5 technology in order to ease the procedure as much as possible.