Blackjack’s precursor was twenty-one, a game of unknown origin. The first written reference is found in a book by the Spanish author Miguel de Cervantes, most famous for writing Don Quixote. Cervantes was a gambler, and the main characters of his tale “Rinconete y Cortadillo”, from Novelas Ejemplares, are a couple of cheats working in Seville. They are proficient at cheating at veintiuna (Spanish for twenty-one), and state that the object of the game is to reach 21 points without going over and that the ace values 1 or 11. The game is played with the Spanish baraja deck, which lacks eights and nines. This short story was written between 1601 and 1602, implying that ventiuna was played in Castile since the beginning of the 17th century or earlier. Later references to this game are found in France and Spain.

When twenty-one was introduced in the United States, gambling houses offered bonus payouts to stimulate players’ interest. One such bonus was a ten-to-one payout if the player’s hand consisted of the ace of spades and a black jack (either the jack of clubs or the jack of spades). This hand was called a “blackjack”, and the name stuck to the game even though the ten-to-one bonus was soon withdrawn. In the modern game, a blackjack refers to any hand of an ace plus a ten or face card regardless of suits or colours. 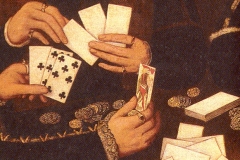 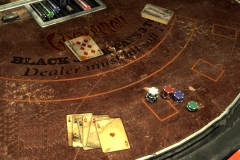 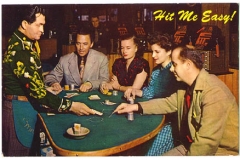 The first scientific and mathematically sound attempt to devise an optimal blackjack playing strategy was revealed in September 1956. Roger Baldwin, Wilbert Cantey, Herbert Maisel and James McDermott published a paper titled The Optimum Strategy in Blackjack in the Journal of the American Statistical Association. This paper would become the foundation of all future sound efforts to beat the game of blackjack. Ed Thorp would use Baldwin’s hand calculations to verify the basic strategy and later publish (in 1963) his famous book Beat the Dealer.
Vote for this page